FOB Korea benzene prices softened in the middle of the week but were at high levels in general, supported by strength in crude prices and Europe and US benzene prices. CFR Northeast Asia paraxylene (PX) prices showed similar changes. In the second half of the week, PTA and polyester fiber futures rebounded on the Zhengzhou Commodity Exchange and this also supported PX prices.

CFR Northeast Asia ethylene prices increased slightly along with firmness in benchmark feedstock crude and naphtha prices. In the middle of the week, a deal for first-half November delivery was heard at $1,150/mt. Apart from this, a maker in China reportedly sold a spot cargo at about Yuan 9,000/mt. This price was equivalent to $1,200-1,250/mt. As operations of vessels were disrupted, buying interest from Chinese end-users for imported cargoes was weak and they might be unwilling to pay this price for imported cargoes.

In the Asia propylene market, prices for imported cargoes strengthened along with bullishness in the China domestic market after the National Day holidays. In Northeast Asia, sellers raised their offers but buying interest from end-users was not strong since restrictions in power use led to low operating rates at derivative facilities in China. On an FOB Korea basis, spot supply was not seen. In Southeast Asia, sellers had room for sales but firm talks were not heard.

In the Asia butadiene market, supply/demand was slack and sentiment weakened. In Northeast Asia, buying interest from Korean end-users for imported cargoes was not seen while Taiwanese end-users held a bearish view and showed no hurry to buy. On the other hand, supply was perceived to be ample. But since profit margins could not be made at current butadiene prices, sellers were reluctant to sell in the second half of the week. 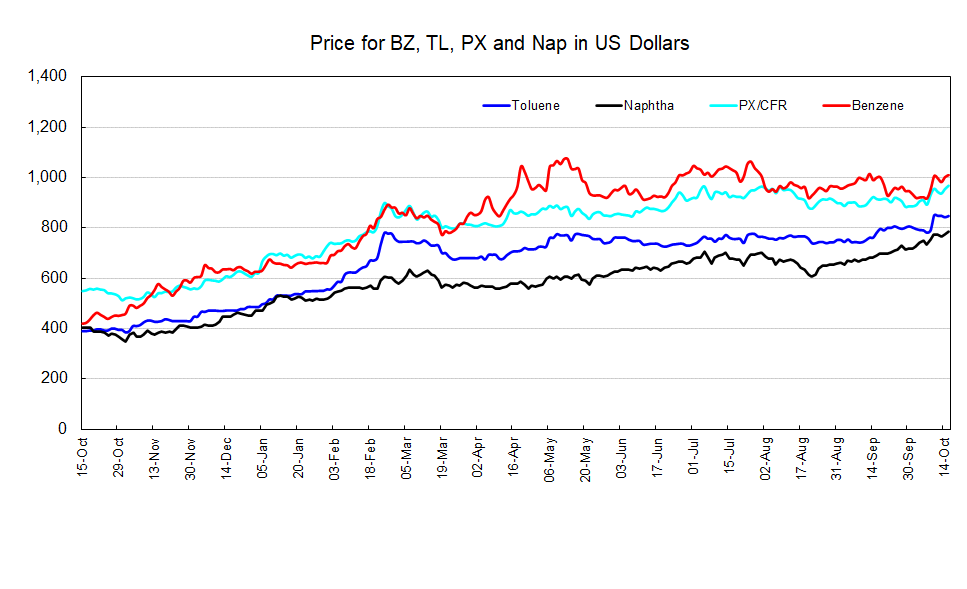