In the Northeast Asia aromatic market, the upside of the market was capped although benchmark feedstock crude and naphtha prices were firm. In China, a new large-scale aromatic facility was expected to start up soon while in the US, operations of facilities were recovering from shutdowns due to a cold wave in February. For this reason, supply/demand was perceived to slack.

The Northeast Asia ethylene market decreased since supply was perceived to be ample along with the startup of new and expanded ethylene and derivative facilities in China and Korea. In Korea, LG Chem and GS Caltex were scheduled to start up new ethylene facilities in June. In trade this week, cargoes to be delivered to China in July were reportedly traded at $910/mt and $925/mt.

The Asia propylene market fell along with bearish sentiment. In Northeast Asia, several new facilities in China and Korea were scheduled to start up and supply was expected to be ample going forward. Under this situation, end-users held a bearish view and buying interest receded. In Southeast Asia, Thailand's PTTGC conducted a sell tender for July loading. Further, one maker in the Philippines carried out spot sale for June loading.

The Asia butadiene market strengthened. In Northeast Asia, amid firmness in butadiene prices in Europe and the US, Asian cargoes were sold to outside the region and supply within Asia was not ample. In addition, the spread with synthetic rubber widened and butadiene prices were seen to be relatively low. Under such circumstances, the market moved up. In Southeast Asia, one maker moved to sell late July loading but a deal was apparently not reached. 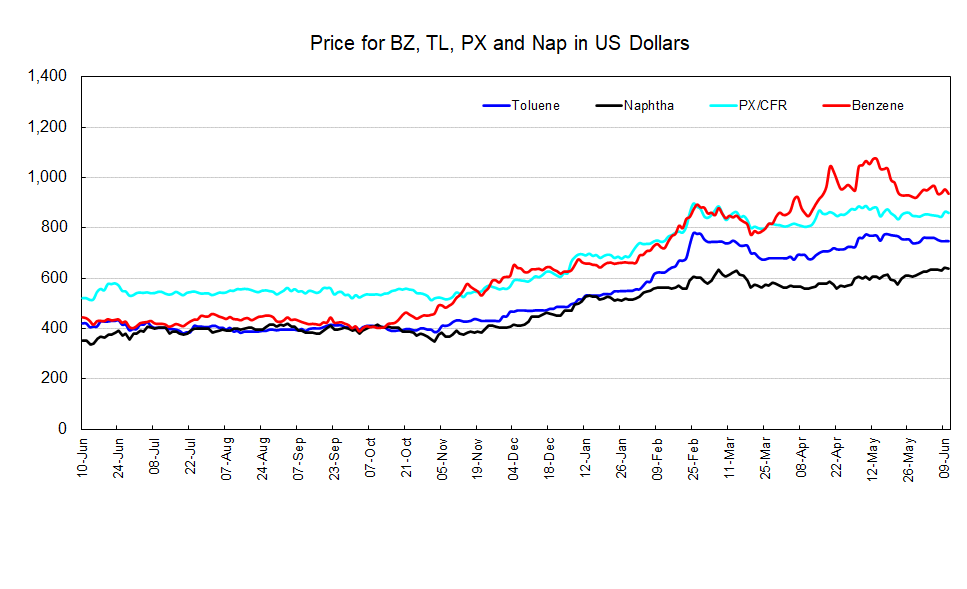