Petrochemicals: May 17-21: Ethylene softens on receding demand along with fall in profitability of derivatives

FOB Korea benzene prices were still at high levels but fell sharply from the previous week along with a drop in US benzene prices. In the US, supply was tight since facilities were shut down due to a cold wave and power failure in February and volumes of imported cargoes were limited. But facilities were restarting and supply tightness was receding. CFR Northeast Asia paraxylene (PX) prices softened along with benchmark feedstock crude and naphtha prices.

The CFR Northeast Asia ethylene market dropped as profitability of some derivatives fell and demand decreased. On the supply side, two new ethylene facilities were scheduled to start up in Korea in June onwards. In trade this week, a deal was heard at $1,080-1,090/mt.

The Asia propylene market softened. In Northeast Asia, facilities in China that had been shut down resumed operations and supply recovered. As a result, buying interest from end-users receded. On the other hand, Southeast Asian cargoes flowed into Northeast Asia and perceptions of tight supply/demand eased. In Southeast Asia, many end-users had finished buying until June while some makers had room to sell. Supply was therefore seen to be ample. Makers showed strong selling interest.

The Asia butadiene market was unchanged. In Northeast Asia, talks on June delivery were fading and activity was subdued. As market directions ahead were uncertain, many players hoped to negotiate based on market quotations. On the other hand, amid firmness in the US market, traders were trying to sell Asian cargoes to outside the region. In Southeast Asia, Thailand's PTTGC conducted a sell tender for June loading while another maker issued a buy tender for June delivery. 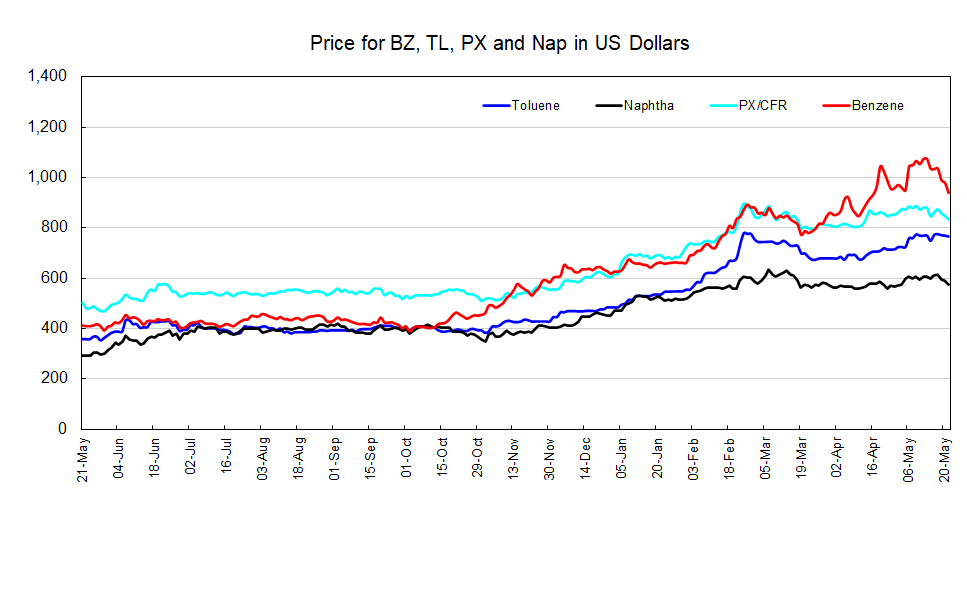